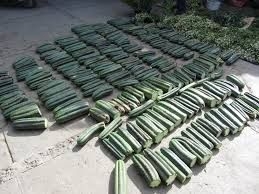 Like many other plants, Echinopsis pachanoi can be propagated from cuttings. The result is a genetic clone of the parent plant. For example, the top 15 cm end of a cactus column can be cut off with a knife, then the cutting can be left to dry for about two weeks in the shade, or in a dry place. This is so that the surface of the cut end dries out like paper forming a seal to keep out microbes such as fungi and bacteria. The cutting can then be dipped in rooting hormone (optional, but effective) and planted on the surface of or buried to a maximum of 2.5 cm deep in good propagation media mixed with some sand and perlite. The sand and perlite will ensure that the media will drain and not stay too wet. The cutting is kept in the shade or indirect sunlight, so that the root system can develop and the cactus does not grow too thinly. It is best to withhold watering for the first week or two. The moisture in the media alone is sufficient to begin the formation of adventitious roots. Lightly tug on the cactus to check for root formation. Do not attempt to pull the cactus all the way out of the soil to examine it. You will damage any roots that may have already begun to form. After about six months, significant roots will have formed and the cutting can be repotted in the same type of medium.